As you know we have distributed new proposal last night, it is still early to assess how it is going to work but I can tell as an early reaction from some of the participants, not all of them we still need more time to discuss with all of them, but there is a general sense of hope, I would say even optimism that might produce a triple consensus: 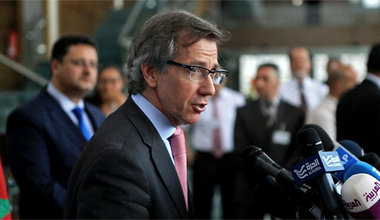 A consensus in the Libyan society, what we are receiving from many Libyan citizens from many Libyan people is that they want this agreement to work, there have been even surveys, very serious surveys on the Libyan society, and the support for the agreement is very strong. A consensus among the participant in the dialogue, the people we have seen and I insist that we have not met everybody, but in general there is a very positive feeling, obviously it doesn’t mean that they agree on hundred percent and some fine tuning will be necessary; on the participants the mood is very positive. A consensus also in the international community, I have been meeting the ambassadors that are represented here, and I have been in contact with other countries that are not here but have expressed their strong support. So I think this triple consensus is a possibility and this could help to make progress in the coming days to reach a total agreement soon, but still we have to be cautious, we have to wait and have final confirmation from the participants.

In the meantime I think it is important to insist on the idea that we will continue to meet with some of the key stakeholders and as you heard last night the security track is important, we need a strong support of the armed formations, the armed groups, we will not succeed if we don’t have their support and this also what we are going to do in the coming days, to try to expedite the political agreement and to try to expedite the support of the armed formations so that all the tracks will converge on this agreement.

As you may know we are now going to Germany there is a very important meeting, the international community especially the five permanent members of the Security Council want to send a message of support also to this process.

Special Envoy of the UN Secretary-General and Head of the United Nations Support Mission in Libya (UNSMIL) Ján Kubiš concluded today a three-day visit to the United Arab Emirates, from 8 to 10 April.

TUNIS, 10 April 2021 - The Legal Committee of the Libyan Political Dialogue Forum (LDPF) concluded today a three-day in-person meeting, which took place in Tunisia from 7 to 9 April to finalise the discussions on a constitutional basis for