01 January 2016- Underscoring United Nations concern for the wellbeing of the Libyan people, Special Representative Martin Kobler visited on New Year’s Day a camp for Tawerghan displaced people and toured a Tripoli market on the sidelines of a high-profile political trip to Libya to push for broad support for the implementation of the Libyan Political Agreement. 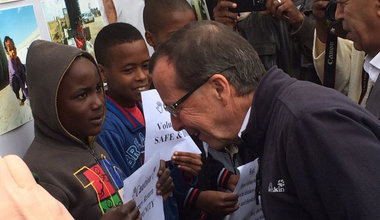 Kobler timed the trip to the Libyan capital on New Year’s Eve and New Year’s Day as a show of solidarity with the people. He visited the Al-Falah camp for Tawerghans, who have been displaced from their city of Tawergha since the 2011 revolution that overthrew dictatorship. Kobler listened to their concerns and demands. He pledged to exert all possible efforts to work on the return of all Internally Displaced People (IDPs) to their homes in 2016. “Most important topic of the Government of National Accord is to urgently address the security situation in the country to allow all families to return home and children to go back to their schools,” Kobler said.

On the political level in Tripoli, Kobler exchanged views with AbuSahmein and members of the GNC on the Libyan Political Agreement and the way forward. He explained that five principals will guide the way ahead: the Libyan Political Agreement will be the basis; All initiatives should be UN-facilitated; this process should be
inclusive; the need for a peaceful transfer of power; and stressing Libyan ownership of the process. He also discussed the situation in Sirte. “I agree with the GNC delegate from Sirte - Sirte is dying, and the United Nations position here is clear: this has to stop immediately. We must save Sirte,” he said.

Before returning to neighboring Tunisia, where the United Nations Support Mission in Libya (UNSMIL) is based, the Special Representative held a news conference at Meitiga airport in Tripoli. He told the journalists that his firm goal is to convince all the Libyans to join the Libyan Political Agreement as it is the basis for any political solution in the country. “I am encouraged by the positive reactions of Libyan interlocutors whom I have met those two days, I made it clear that the Libyan Political Agreement and the United Nations Security Council resolution 2259 will guide the way forward,” Kobler said

The Secretary-General wishes to express his sincere gratitude to Ms. Stephanie Williams, who has just concluded her assignment as his Special Adviser on Libya.

As I conclude my mission as the Special Adviser to the Secretary-General, I would like to thank the Libyan people and the hundreds of interlocutors with whom I have had the privilege to meet and engage over the past eight months in Libya and abroad for their trus

Thank you for the opportunity to brief the Security Council on recent developments in Libya.