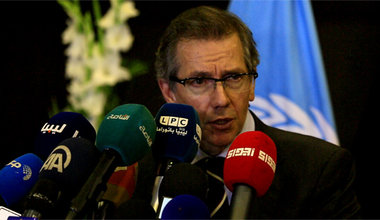 LEON: We are in a normal moment which is the usual process in any such negotiations like the ones we what we are having here in Skhirat. So, we have a big debate and this debate reflects the interest of the parties of getting the best possible agreement. It reflects the diversity of views in Libya. And this is a debate where people exchange words. So from this point of view we see this a positive debate. They are not shooting. They are each one expressing their views. So, let us leave them continue this way and us leave them participating in the debate. I think the closer we are to the possibility of a final agreement the more we will see tough positions, there will be strong views expressed by the different actors. It doesn’t mean that we will not reach agreement.

It would not be is the first time we have people that people expressing huge difficulties to be part of a process sand people that finally are present in the final signing. This proposal we have presented is a proposal that should not have winners or losers. If someones is thinking that there will be clear winners and clear losers this person wouldn’t be understanding what we are trying to do.

We will work on agreement that respects the principle of consensus, the principles of inclusion and balance, and this is what the United Nations has been trying to do and will continue to do.

There is still lack of trust between the parties, which is partly explaining what is going on in the talks. This means difficulties for reaching a final agreement. It mean also difficulties for being more flexible.

The debate today is based on elements of procedure and elements of substance. Let me enhance the first ones whether the text should be changed (or) should not be changed. We understand the positions of each one, those who signed in July, those who want to join now and have remarks.

I think from the point of view of substance at this stage I think all of you are aware of the different ideas, the parties are not that far. So, I am not too worried about the substance. I think the gap is not that big so it should be easy to bridge it. From the point of view of substance we are also reflecting on different ideas and we believe we have also seen before differences of criteria on some procedural aspects and it was always possible to reach a solution, to find a formula to accommodate the different views and we still hope this will be the case.

What I would like to enhance once again is that Libyans have to look around. They should not stay looking inside each other and these points around the articles or around the different proposals. What is important is that there are many people suffering in Libya and these people are really hoping there is a solution. And also the international community is expecting the Libyans to solve their differences because there is terrorism, there is migration mafias, there are many problems that are affecting Libya but also the international community.

So we all hope that Libyans will understand this and we all hope this debate they are having today in different parts of Libya will be solved positively and that all of them will be back in Skhirat to finalize our work, to discuss the government and hopeful to sign before the 20th of September.

Question: They will be back in two days as planned?

LEON: the plan is that they are back tomorrow, the day after tomorrow the latest. This is what we are expecting but I am sure you are aware they had these debates in today’s session in Tripoli. They have also this statement by a number of MPs in Tobruk, although the overwhelming message in both cases we are still engaged in the dialogue, so we want still to continue, here are our views, we accept this, we don’t accept it but we are still engaged in the dialogue. So I prefer to think that it will be possible and, yes, tomorrow and the day after tomorrow they will be back and they will continue the discussions and start exchanges on the unity government.

Question: So the parliament is not leaving?

LEON: No, I don’t think they are leaving.

LEON: I think so. What we have seen today in Tripoli and what we hear that there are many positive views about this agreement so we still hope that the final decision will be positive and we know that also there is a debate in Tobruk, but many members are out, some of them are at the Hajj, some others are here, we have this big delegation of HoR (House of Representatives) delegation that are here, some others are in Tunisia, some others are in Egypt. So, there are many different views, many are positive, and others are more critical. But this has been the case all the time. We always had people opposing what we are doing here. What you have seen in the last month is, yes, a lot of times we said we have to go on, but every time we have been making progress in the right direction. And I can tell you, We have never been so close to a text that we believe, as United Nations, that can be acceptable for all the participants and in our discussions with them, with the people participating here we believe that this text should represent what they can accept, not what each side would like to have. We know that each side would like to get more, but what they could accept.

We have also in parallel a procedural debate. Should it be open? Shouldn’t it be open and this is something we are dealing with, but I think as I said before we managed to find formulas before and I believe we will find also formula for this. So what is important is that maybe six months ago we were miles away, hundreds of miles away from final agreement we are now maybe a few yards away. These are always the most difficult ones. But when we are a few yards away it means that it is doable and we all have to try very hard.

The message for all the Libyans, a message for those who are in Tobruk in the House of Representatives and in Tripoli in the General National Congress the UN is not deciding for them. No one can decide for them. They are the ones who have to decide. So there are no impositions. The international community is not telling them what to do. They have to take this decision and they are free to take any decision and everybody will respect. We may like if they decide for peace, for opening their country to cooperate with the international community because as we have discussed the challenges will still be there, if we sign Daesh will be there, mafia trafficking with people will still be there, but we will have the chance . Or we will not like if the decision is negative and (they) will continue with the confrontation but everybody will respect.

LEON: No. I don’t think that Tobruk has rejected (agreement’ version) ... According to my information there was no quorum. It was simply a communique made by a number of deputies … This is not a decision of Parliament…
About the date, you know that my mandate ended in the month of August. I have made a proposition to continue, I told everyone that I am at the disposal of this process as long as this process continues. Eventually, if there is a decision to stop the process, whether in 20 September or before this date or in the coming days, the time of Leon as Special Representative of the Secretary-General will end. But for the moment we are not there yet … If the decision of the parties is to continue with another envoy, why not ... But we are not there yet, we continue to work …