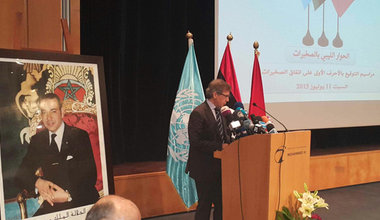 Participants of the Libyan Political Dialogue

Envoys and Ambassadors, Ladies and Gentlemen

I would like to start by thanking all the participants of the Libyan political dialogue, who have for many months worked hard and constructively in the spirit of compromise and reconciliation to reach this stage.

Once again today, a week before the end of the holy month of Ramadan, the people of Libya have their eyes on this ceremony, and they are putting their hopes for peace in your hands as you initial a text of a political agreement, the agreement of Skhirat, that we all wish will bring to an end the conflict that has ravaged the country for many months.

This is one but a very important step on the road to peace ... a peace, which all Libyans have been long seeking to achieve. It is thanks to your courage, commitment and determination that we are here this evening.

This text is a comprehensive framework that will allow Libya to complete the transition that started in 2011 by building common ground and reconciling a range of diverse interests; with this agreement you have outlined the principles, the institutions and the decision-making mechanisms to complete a transition until the adoption of a permanent constitution. Through this text you are laying the foundation for a modern, democratic state based on the principles of inclusion, the rule of law, separation of powers and respect for human rights.

This political agreement is the outcome of many months of negotiations to which Libyan representatives present here today have contributed through their relentless efforts. But this text is also the result of many who are not here and that have offered their contributions through the different tracks in the process, municipal representatives – some of them here tonight - political parties – some of them here tonight - women and activists, which have gathered in Algeria, Egypt, Tunisia, Switzerland and at the European Union in Brussels. The support of neighbouring countries and many others represented tonight has been really important. Let me just mention four of them, Saudi Arabia, United Arab Emirates, Turkey, Qatar. It could be a long list of countries that have been contributing to these efforts.

I want to emphasise, and let me please really enhance this message: the door remains open for those who chose not to be here today. They also have played a crucial role in developing this text. As I have said many times, no text can be perfect, and it cannot meet the expectations of all parties given their conflicting demands and the constraints of time. I am confident that in the weeks ahead we will clarify the issues that remain contentious and address the outstanding concerns. I am confident that the moderate voices will hear the call for peace of their Libyan brothers and will work constructively to end the political and institutional divisions which are causing so much suffering to the Libyan people. I am also persuaded that the logic of peace will prevail in the General National Congress, as it has been the case until now.

Good progress has been achieved but crucial work remains to be completed in the near future, so that the Libyan people can soon harvest the fruits of peace.

I strongly encourage all members of the dialogue to redouble their commitment and efforts in the spirit of reconciliation and compromise to save their country from the scourge of protracted conflict and agree swiftly on a government of national accord.

You will need to reach consensus on the annexes, which will contain important provisions and form an integral part of this agreement.

Libya needs a strong government representing all Libyans, that the international community can and will support, to address the many challenges that the country is facing.

The role of security actors - let me also enhance this message - is a very important part of this effort, and will be key to sustain and support the implementation of this agreement. We have listened to their concerns and will continue to listen to their concerns and taken onboard their contributions. It is my intention to convene them all together before the final signing of this agreement.

I am encouraged by the recent release of prisoners, which is an important step towards national reconciliation. But many more remain illegally detained and I urge all parties to release them before the end of Ramadan. It would be a deserved gift to their families as they celebrate this Eid as well as an unequivocal sign that all parties are genuinely committed to achieving reconciliation.

Allow me to take this opportunity to thank the international community, which is represented here tonight by an excellent group of ambassadors and envoys, for having accompanied this process and to emphasise that all its members are ready to support a government of national accord and to provide guarantees for a successful process of national reconciliation. This has been really a great example of successful partnership between Libya and the international community, between regional actors and the United Nations and, of course, the host country Morocco.

My final words will be words of gratitude, first of all, to my excellent team. Nothing could have been possible without their support, without their creativity and their patience faced to my difficult leadership of the work. Let me also mention my family, for the long days and weeks in which I should have been home but I was with all of you. My wife is here tonight, by the way.

But in closing remarks, of course, last but not least, allow me to thank the Kingdom of Morocco, very specially his Majesty King Mohammed VI for his generosity, for his support for hospitality, but very specially his role of facilitation which has been so important for all of us. I think we all agree that we could not have found a better place to work together to feel the necessary environment for this work, which hopefully, as I said, will open a new page in the Libyan history.

TRIPOLI, 24 October 2021 - The Special Envoy of the UN Secretary-General and Head of the United Nations Support Mission in Libya, Ján Kubiš, hailed the achievements secured by the (

Thank you, Foreign Minister Mangoush, for the initiative of convening this international conference.  That it takes place in Libya’s capital is a testament to the progress that Libya has achieved.