04 April 2015 - Libyan women have a crucial role to play in resolving the crisis in Libya, the Special Representative of the Secretary-General for Libya, Bernardino Leon, said in an address to about 250 Libyan women who gathered in Tripoli to press for the active engagement of women in the political dialogue process. 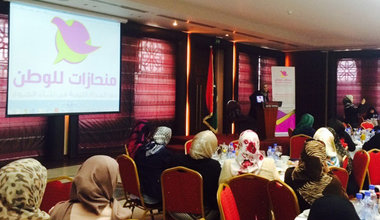 The representatives of various women groups in Tripoli and other areas met in the capital at the invitation of the “Munhazaat Lelwatan” (Biased for the Country) coalition, in collaboration with Ms. Nehad Meiteeg, one of the two female participants in the political dialogue facilitated by the United Nations Support Mission in Libya (UNSMIL). The aim of the meeting was to enhance the inclusion of Libyan women in the dialogue by expanding the outreach to diverse Libyan women during the process.

Speaking via Skype on Saturday 04 April 2015, Mr. Leon briefed the audience about the progress of the ongoing political dialogue with the aim of ending the conflict in Libya. Libyans, particularly women, have paid and continue to pay a high price in the armed conflict, he said, adding that the role of women in pushing for the dialogue process is crucial, as it is also crucial in ensuring the implementation of any political agreement resulting from these talks.

“Equally, women have a very important role in following up on the political process and in participating in the new Unity Government,” the Special Representative said in his opening remarks.

Mr. Leon answered some of the questions regarding the ceasefire, timeframe for agreement and concerns about spoilers seeking to derail the process. The SRSG stressed that efforts to bring peace to Libya must continue regardless of the obstacles, adding that quick solutions were necessary due to the humanitarian and economic difficulties the country is facing and due to the increasing terrorist attacks by Daesh.

Mr. Leon said the UN Secretary-General has stressed the importance of women’s participation in the transitional process. The SRSG said he hopes to see more women in the Libyan dialogue, at the municipalities, tribal and other tracks. 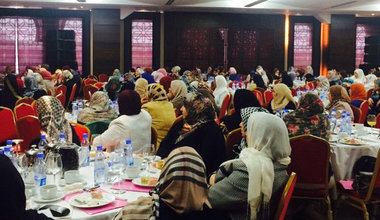 Mr. Leon said: “We count on Libya women, who were active during the 17 February revolution, to continue to advocate for peaceful solution … We count on you to spread the culture of peace in your communities and to talk and engage with all who have a role to play in brining stability to Libya.”

The Special Representative acknowledged the role of the two women participants in the political dialogue, Ms. Meiteeg and Ms. Naima Jebril, for their efforts to reconcile the differences among the other participants. Most importantly, their communication with and briefings to civil society and women’s groups at gatherings in Tunisia and Jordan in recent weeks in support of the dialogue were of tremendous importance.

The Secretary-General is following with concern the demonstrations that were held in several cities in Libya, including Tripoli, Tobruk and Benghazi, on 1 July.

GENEVA, 30 June 2022 – Under the auspices of the United Nations, the presidents of the House of Representatives and High Council of State met in Geneva on 28-29 June 2022.