Enabled through UNESCO’s Regional Programmes that promote an enabling environment for freedom of expression, on Thursday 23 April 2015, twenty-six Libyan journalists celebrated their completion of an intensive communication and English skills training course at the British Council in Tunis to build their speaking and writing skills.

“The ability to effectively communicate is integral to the work of a journalist”, stated Michael Croft, UNESCO’s representative to Libya. “Through this training, our Libyan colleagues have been empowered to open new doors, to be exposed to new ideas and expose others to their own. This is something which will lead further personal and professional growth, and improve the quality and tone of their reporting.” 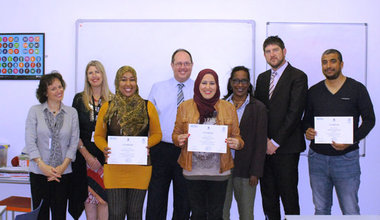 Launched in late February, the programme has provided participants with additional communication and writing skills to develop their professional expertise and broadly expand their audience and sourcing. It followed a direct request of Libyan journalists based in Tunis to improve their ability to express themselves more effectively during meetings and workshops outside of Libya, as well as to better understand and source what foreign media is communicating about the situation in Libya.

This activity was implemented by the UNESCO Tripoli Project Office in partnership with the British Council and made possible through the generous support of the Government of Sweden. It is part of UNESCO’s efforts within the media sector to reinforce the capacity of Libyan media to make a positive contribution to reconciliation in Libyan and to promote conflict-sensitive reporting. As the only agency within the United Nations system with the mandate to promote freedom of expression and freedom of the press, UNESCO works in cooperation with Libyan stakeholders and actors across the various UN agencies, and leading global and regional NGOs promoting press freedom and freedom of expression.