UNICEF: Thousands of children in Libya get a chance to learn and play

UNICEF: Thousands of children in Libya get a chance to learn and play

Tripoli, Libya, 26 Jan 2016- For the first time since the outbreak of war in Libya in 2011, thousands of children are getting a chance to be children again-to learn and play. 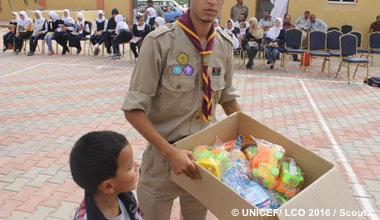 Across the conflict riddled country, UNICEF has worked hard with local partners inside Libya over the last few weeks to ensure that recreational items and learning materials are delivered to schools and Child Friendly Spaces(CFS) in some of the areas worst hit by the war in Libya.

“By being able to play and learn, these children can regain a sense of normalcy and purpose in life”

The materials procured with a generous contribution from the European Union will help over 60,000 children in 28 different cities throughout the country benefit in schools and in CFS.

The educational and recreational kits that have been delivered contain; scrabble, vocal letter boards, games to teach letters and numbers, balls for boys and girls, painting devices, building blocks and puzzle sets among others. Supported by volunteers at the CFS – who had been trained by UNICEF on psychosocial support-, children are engaged in games and also learn team work and simple problem-solving skills.

The games organized at the CFSs provide children with more than just entertainment and a moment to forget about their inconvenient conflict-related experiences; they also allow the children to express their thoughts and process difficult memories.

“By being able to play and learn, these children can regain a sense of normalcy and purpose in life”, said Dr Ghassan Khalil, UNICEF Special Representative in Libya. “These children are the future of Libya and they must be protected at all times”, he added.

In Tripoli and Benghazi alone, 270,000 children require psycho-social support on account of their exposure to violence related to the armed conflict.

UNICEF has prioritized education and psychosocial support to children to help them cope with the horrors inflicted by the conflict.

So far 120 volunteers from various local NGOs in Libya and 93 Scouts and Girl Guides have been trained on child rights, conflict resolution and psychosocial support in order to work with children at the CFS. In turn, they teach the children how to relate, carry out tasks with others and how to resolve disputes amongst themselves. In a country plugged by conflict, such skills and knowledge are important to break the cycle of violence.

Schooling for children has not only been interrupted but schools have either been destroyed or are used by internally displaced people as shelters. Widespread violence has impeded the ability of 150,000 children to access school.

“The longer a child’s education is disrupted, the higher the likelihood that it will never be complete. Children in Libya have already suffered enough during the recent violence and conflict. They must not be forced to sacrifice their future as well”, said Dr Khalil.

“The conflict is no excuse for children not to be learning and that is why UNICEF is working with a network of partners on the ground to give these children a chance to learn and play”, he added.

The recent distribution of 780 cartons of School-in-a-Box alongside the recreational kits has helped over 60,000 children to have basic school stationery for learning and is part of UNICEF’s efforts to ensure that Libya’s children do not completely miss out on their education. 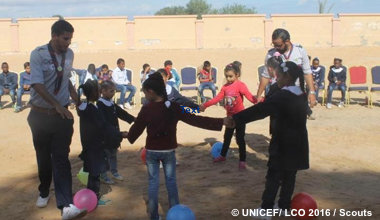 Regular supply of scholastic materials has been severely curtailed by the war and parents can no longer find or afford stationery for their children.

In Benghazi, UNICEF is also supporting catch up classes for 1,900 children whose education has been constantly interrupted by conflict and violence.

Reaching children in need in Libya is an uphill task. Widespread violence and access restrictions hamper the effective delivery of services.
The Boy Scouts & Girls Guides of Libya have been instrumental in the distribution of the recreational kits, providing storage in hubs around the country. The vast network of the Scouts and Girl Guides has helped bring such essential supplies to the door steps of the schools and the CFS.

In Benghazi, UNICEF is working with Ekraa Assembly For Development and Education, Organization Breezes Libya for Sustainable Development, and Boy Scouts and Girls Guides of Libya to support the catch up classes and deliver critical supplies such as the School-in-a-Box so that once again, children have a chance to learn.

A unique partnership between UNICEF and local municipalities across Libya, under the Together For Children national campaign launched by UNICEF in April 2015, has served as a vehicle to deliver UNICEF’s interventions implemented in partnership with local NGOs. Municipalities who signed MOUs with UNICEF contributed to the establishment of child friendly centres and provision of school-based psychosocial support implemented by local partners, among them; Sheikh Tahir Azzawi Charity Organization, Alnahla for Education and Family Affairs, and Almahra for Capacity Building.

Such partnerships- in the short term- act as a vehicle for delivering urgent services to children-and in the long term- provide the foundation to accelerate service delivery and realization of child rights in Libya.

###
About UNICEF
UNICEF promotes the rights and wellbeing of every child, in everything we do. Together with our partners, we work in 190 countries and territories to translate that commitment into practical action, focusing special effort on reaching the most vulnerable and excluded children, to the benefit of all children, everywhere.
For more information about UNICEF and its work visit: www.unicef.org.
Follow UNICEF Libya on Twitter
For further information and interview requests, please contact:
Mostafa Omar, UNICEF Libya, mosomar@unicef.org , +216 990 70 815