Tunis, Tunisia – 07 May 2015 - Marking World Press Freedom Day for Libya, UNESCO Tripoli Project Office in partnership with the Women’s Empowerment Section of the United Nations Support Mission in Libya (UNSMIL), organized a roundtable discussion on Women, Media and Peace. Celebrating the fundamental principles of press freedom, the event highlighted the interplay between these different issues in the context of conflict, with special focus on women journalists. 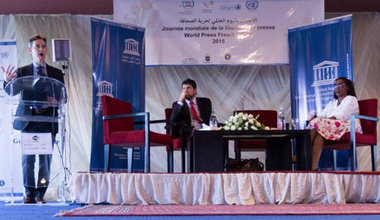 At the 5-6 May 2015 event, which was held in Tunis, Tunisia, Libyan and international experts, accredited diplomats, media professionals, and civil society representatives discussed tools and best practices to empower women journalists in their effort to promote a culture of peace, dialogue, and acceptance in Libya. Participants paid special tribute to journalists who lost their lives in the line of duty since the outset of the Libyan conflict.

’’The context, the entire media environment, has drastically changed since we last commemorated World Press Freedom Day’’, Michael Croft, UNESCO’s representative to Libya, said in opening remarks’’. He added: ‘’The discussion now centers less on technical aspects and more on fundamentals; how can Libyan media professionals, in a context of conflict, carry out their role to educate and inform society’’.

Croft pointed to the key role female journalists could play, both in their work and societies.

In the keynote remarks, the guest speaker, David Kaye, UN Special Rapporteur on the Promotion and Protection of the Right to Freedom of Opinion and Expression, stated that ‘’seeking, receiving, and imparting information is a human right that must be protected in all countries around the world. Journalists have a profound responsibility to help establish the foundations for a free and democratic society, so the world needs to know what is happening. Here, the Libyan journalists can play an important role in both informing the Libyan public about their human rights, and to draw attention when they are violated.’’

Noting the significant concern expressed by many participants over the issue of incitement to violence in the Libyan media, Kaye stressed that ‘’Journalists should not fall in the trap of becoming a part of the conflict, this puts them at greater risk and then the truth of their reporting is lost. As difficult as it may be, they need to continue to focus on reporting in an accurate and impartial manner following the ethical standards of journalism’’.

During the panel discussions, participants underscored the important role of the media and its responsibility to report impartially and professionally in order to prevent the escalation of conflict and tension given the current situation in Libya. Highlighting the pressing need to reinforce the capacity of Libyan media to make a positive contribution to reconciliation and to enhance the role of journalists and civil society in promoting gender equality, Libyan participants noted that the underrepresentation of women in Libyan media, particularly in leadership roles, as being representative of what they consider as a trend of growing discrimination against women in the country.

On May 6, two practical sessions were held for Libyan journalists on gender sensitive reporting and digital security for journalists.

The event to mark World Press Freedom Day was organized in partnership with the Women Empowerment Section of the United Nations Support Mission in Libya (UNSMIL) and made possible through the generous support of the Governments of Sweden and Finland. As the only agency within the United Nations system with the mandate to promote freedom of expression and freedom of the press, UNESCO works in cooperation with Libyan stakeholders and actors across the various UN agencies, and leading global and regional NGOs promoting press freedom and freedom of expression.