UNESCO: When Media Makes Peace: Exploring the Roles and Responsibilities of Media during Conflict

UNESCO: When Media Makes Peace: Exploring the Roles and Responsibilities of Media during Conflict

Madrid, Spain – 27 July 2015 – As part of UNESCO's regional projects that promote and foster freedom of expression and address issues of hate speech, a four-day workshop to discuss the role and responsibilities of media during times of conflict commenced in the Spanish capital Madrid on 27 July 2015. It is being attended by thirteen managers and owners of Libyan media outlets who will discuss the current state of the Libyan media and ways to reinforce its capacity to contribute to reconciliation and peace, and to promote conflict-sensitive reporting. 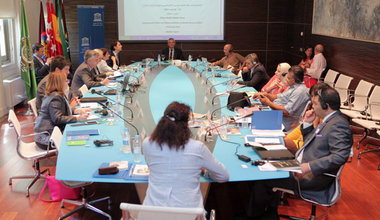 “UNESCO’s programming aims to encourage a community of best practice within Libyan media, assisting media professionals to identify and then integrate professional norms and standards in their programming, be it online or on television” stated Michael Croft, UNESCO Representative to Libya, “But enhancing professionalism and ethical standards needs to be viewed as a priority by owners and managers for fundamental change to be possible; involving decision-makers is crucial to the sustainability and success of these efforts and this meeting is the first step in that process.”

The participants who represent multiple media outlets inside and outside Libya including TV channels, online newspapers and blogs, embarked on discussions related to hate speech and ways to develop Libyan journalism amid the ongoing conflict in the country.

Manual Gomez-Acebo, Director General for the Maghreb, Africa, the Mediterranean and the Middle East, Spanish Ministry of Foreign Affairs and Cooperation, stressed that ‘’in this ongoing process of reconciliation, the media has a fundamental role to play. Their role as communicators of real and independent information is essential in order to promote peace and maintain the road to democracy. The choice of editorial lines is a decision that carries a great responsibility, especially during a period of civil tension, headlines are much more than words; they can have a real impact on the lives of citizens.’’

This activity is implemented by the UNESCO Tripoli Project Office in partnership with Spain’s Ministry of Foreign Affairs and Cooperation, and the Organization’s contribution has been made possible through the generous support of the Government of Finland. It is part of the Organization’s efforts to reinforce the capacity of Libyan media to contribute to reconciliation and promote conflict-sensitive reporting.