Libya - IOM, the UN Migration Agency has found that the trip to Libya is reportedly costing more for a larger proportion of migrants from Sudan and Nigeria. In 2016, 60 percent of Nigerian respondents and 41 percent of Sudanese respondents reported paying between USD 1,000 and 5,000 for their journey to Libya.

This increased to 71 percent of Nigerian respondents and 64 percent of Sudanese respondents in the first few months of 2017. This data was collected through Flow Monitoring surveys conducted among 1,314 migrants.

This data is included in the Round 8 DTM Migration information package, which presents data collected between December 2016 and March 2017. It highlights that 381,463 migrants were found to be present in Libya during that period.

The package provides a holistic overview of resident and mobile migrants in Libya. It presents data on migrants’ demographic characteristics, journeys, intentions, relations with the host community, documentation status, educational and vocational backgrounds. The data builds on Libya 2016 Migration Profiles and Trends, which was published in March.

The information package provides detailed information on where 381,463 migrants from 38 different nationalities are in Libya. It also includes a dataset, which for the first time, provides a quantification of migrants by nationality in each location. The regions of Misrata (66,660 individuals), Tripoli (53,755 individuals), and Sebha (44,750 individuals) are reported as hosting the largest number of migrants, while the main nationalities were recorded as Egyptian, Nigerien, and Chadian.

Relations were found to be poor between migrants and the host community with multiple incidents of tension in 17 percent of Libya’s municipalities. However, in 33 percent of the municipalities, migrants were reported to have a positive impact on the local labour market, contributing to a stronger economy and more jobs.

“We are working to fill in the missing link between migrants on the ground, humanitarian actors and policy-makers by providing timely and comprehensive data on migrants across the country, some of whom are transit migrants and others who live and work in Libya,” explained Daniel Salmon, IOM Libya DTM Programme Coordinator. “The report synthesises this information in a digestible format; however, anyone interested in doing any further analysis is highly encouraged to use our datasets, which we make available to the public to use.”

New indicators were added to gather data from key informants on the documentation status of most migrants in their localities as part of efforts to obtain greater data on migrant vulnerabilities. Migrants appeared to have a valid residence document or work permit in less than 20 percent of all cases; with migrants who had been in Libya for a year or more being most likely to have access to a residence permit (in 17 percent of all neighbourhoods reporting).

The Flow Monitoring surveys also indicated that migrants departing from Senegal, Burkina Faso and Nigeria are increasing their use of routes through Algeria rather than Niger to reach Libya as compared to 2016. As an example, 21 percent of migrants who departed from Senegal reported coming to Libya through Algeria and 70 percent reported coming through Niger as compared to 2016 when 85 percent of those departing from Senegal had reported using routes through Niger.

All reports, methodologies and datasets are available at www.globaldtm.info/libya 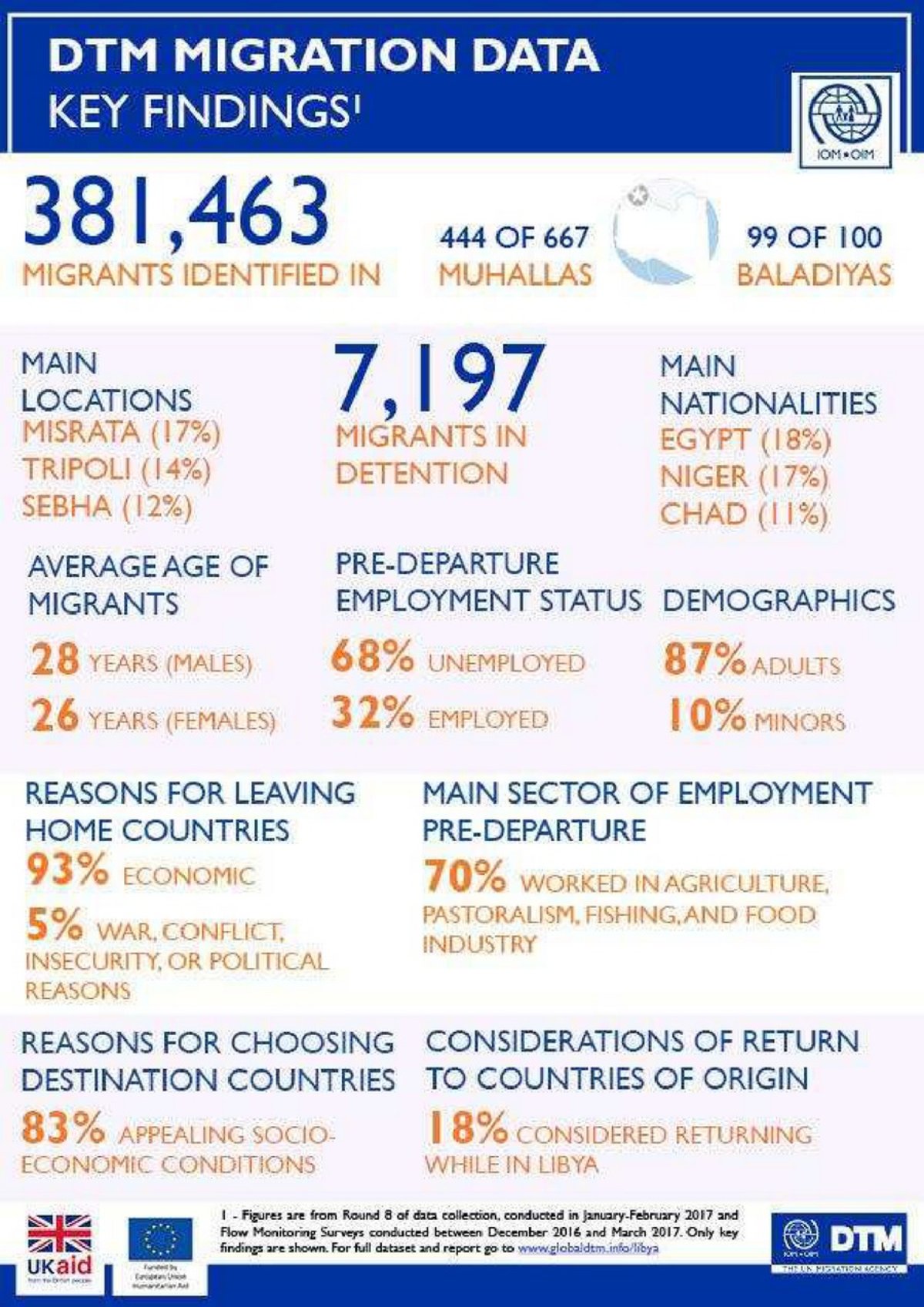 UNSMIL condemns brutal attack against school children in Al Ajaylat city, calls for perpetrators to be brought to justice swiftly

UNSMIL strongly condemns the brutal attack yesterday against children as they were leaving school in the city of Al Ajaylat, which led to the killing a 16-year-old boy, Musab Jum'a Dawah Bin Masoud, and injured two other children, all in their school uniforms.

I want to remind as I said before, time is not on your side. I would like to alert you to the fact that there is a direct cost for inaction and obstruction.

On 1 December, Economic Working Group (EWG) co-chairs of the International Follow Up Committee for Libya, including Ambassadors of Egypt and the United States, the European Union, and the Acting Special Representative of the Secretary-General Stephanie Williams, as well as